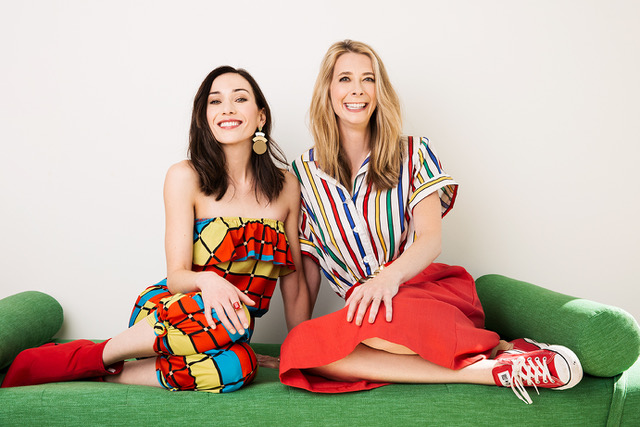 Jocelyn DeBoer and Dawn Luebbe are the Spirit Award-nominated directing team known for their singular visual style and fresh, whip-smart comedy. The duo first met performing sketch and improv together at the Upright Citizens Brigade Theatre, where they have now been mainstage performers for over a decade. They joined forces as creative partners in 2015.

Variety deemed Jocelyn and Dawn’s debut feature, Greener Grass, “the most pleasant surprise of this year’s Sundance” following its 2019 world premiere. Depicting a hilariously deadpan hellscape of competitive suburbia, Christian Blauvelt of IndieWire remarked, “DeBoer and Luebbe have comedic instincts sharp enough to cut diamonds, and they’ve given us a jewel.” Jocelyn and Dawn were listed among IndieWire’s 25 Rising Female Directors to Know in 2019. In the US, Greener Grass was distributed theatrically by IFC and is currently streaming on Hulu. The duo recently participated alongside Olivia Wilde in the Wonder Woman Directors Panel at the Savannah Film Festival, and are attached to direct a television show starring Dakota Fanning and a feature film starring Elizabeth Banks. In 2018, Jocelyn and Dawn directed two episodes of the third season of TruTV’s Adam Ruins Everything. They have also written and produced three short films which have appeared in over 70 film festivals across the globe, receiving numerous awards including a writing award at the 2017 SXSW Film Festival.

Jocelyn and Dawn are thrilled to be represented by Biscuit Filmworks and are chomping at the bit to make their mark in the world of commercial directing. Jocelyn’s background is in advertising, having spent several years as Head of Sales at The Station and The Lodge, an all-inclusive production and original music company based in Soho, NY, headed up by industry veteran Hugh Broder. Dawn’s background is in the world of fine art photography, where she worked alongside renowned New York art dealer Monah Gettner for nearly a decade, specializing in mid-century French and American black and white photography.